I want to finish the recounting of my snowbird adventures with a few more pictures and comments, mostly about shore leave. The cruise we were on had two stops, Key West and Cozumel in Mexico. The stop at Key West was fairly short and a few pictures from it were included in Part 1.

One of my biggest complaints about the cruise experience is that the cruise ship had no information on what to do ashore other than the trips and tours that they were selling. If you did not want to spend money with them, they did not want to help you. They did not even have maps of the cities at which they were stopping. Some in our large group had done their homework and knew what they wanted to do. I was not among them. I did no planning at all for this trip--I left that to others. That was a mistake. If I ever again go on a cruise, I will do some research to find what is available in the places the ship stops.

Below is a picture of our ship, Carnival Imagination. Though it is a huge ship, it is one of the smaller ships in the Carnival fleet. It was built in 1995, and the newer ships are considerably bigger. Wikipedia has a lot of information about all the cruise lines, including Carnival. Compared to a large modern cruise ship, the ill-fated Titanic was quite small. 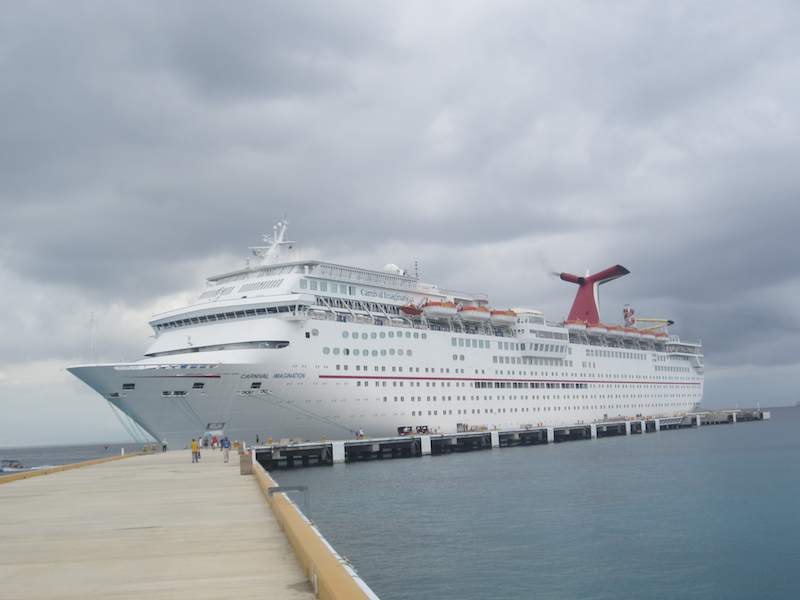 Here is same ship from almost the same location but a few hours later. 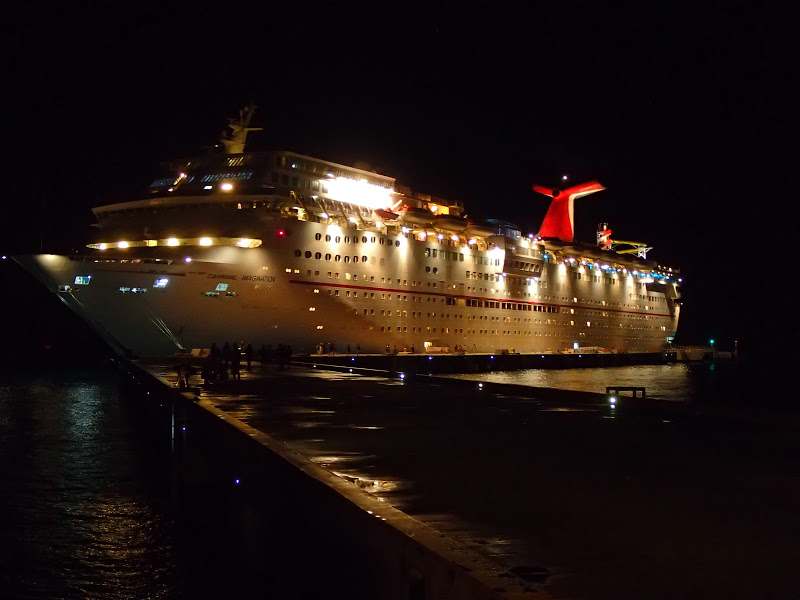 To get from the boat to the shore, one had to walk down the pier through a shop owned by the Carnival. It sold alcohol, which the passengers could buy but which they could not take back to their cabins, cigarettes, and jewelry. And then one was in Mexico. (The alcohol that people bought ashore was held for them until they disembarked.) 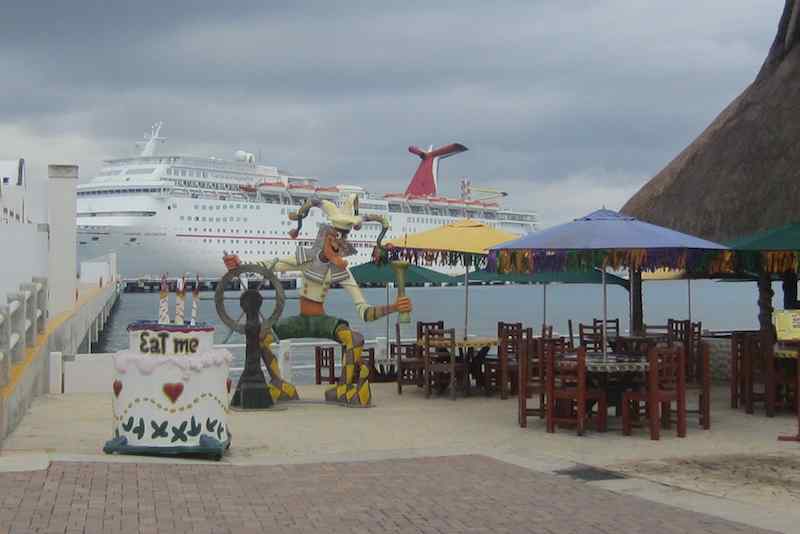 You might wonder why the emphasis on alcohol and cigarettes. Without U.S. taxes, they were much cheaper in Mexico. However, there were limitations on how much a person could bring back through customs. I think it was only one carton of cigarettes, but several bottles of alcohol. I never did figure out why jewelry was popular. Are there special taxes on jewelry? 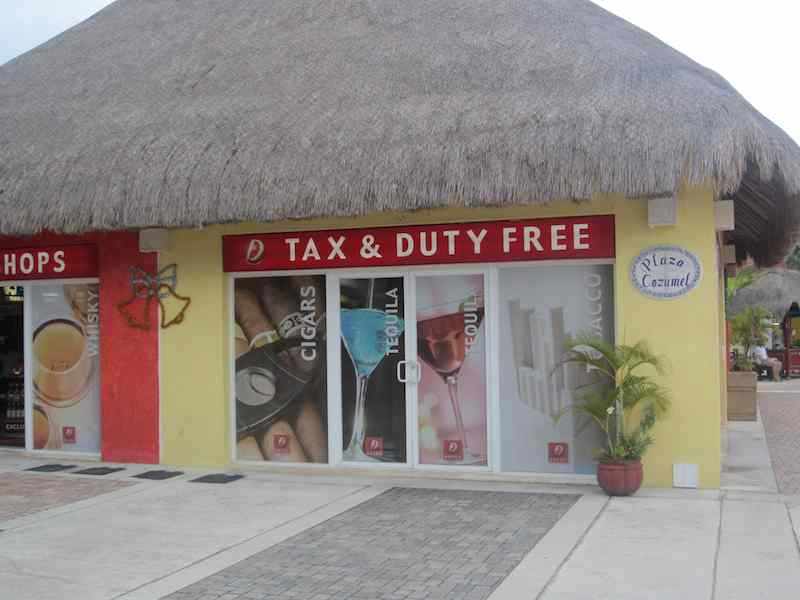 Beyond the Carnival store was a small shopping area that Carnival probably also controlled. There were guys in front of most of the stores hawking the wares. Some street musicians were playing for tips in front of a nativity scene with a background of palm trees. 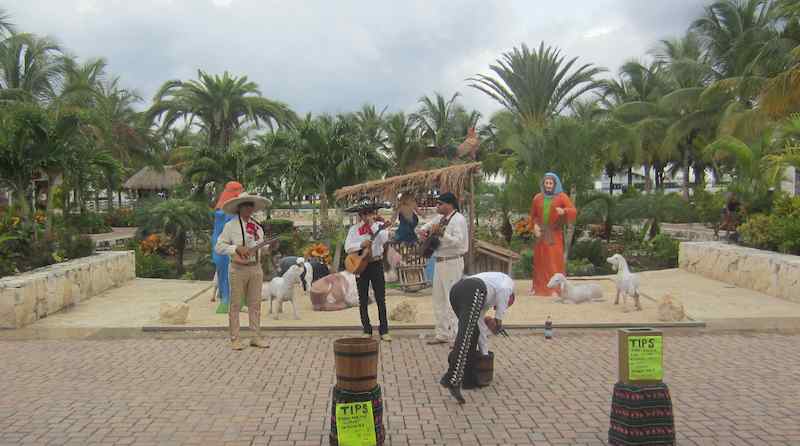 One of the stores had a map of the island. Cozumel is a bit south of Cancun. It has an international airport and there were fairly frequent flights into it. Some of the Carnival-sponsored trips took people to the mainland for adventures, and there was a car ferry that made regular trips. Several of our group had made plans to hire a taxi to go to the Parque Chankanab and snorkel, and they had a good time, seeing lots of fish and coral. 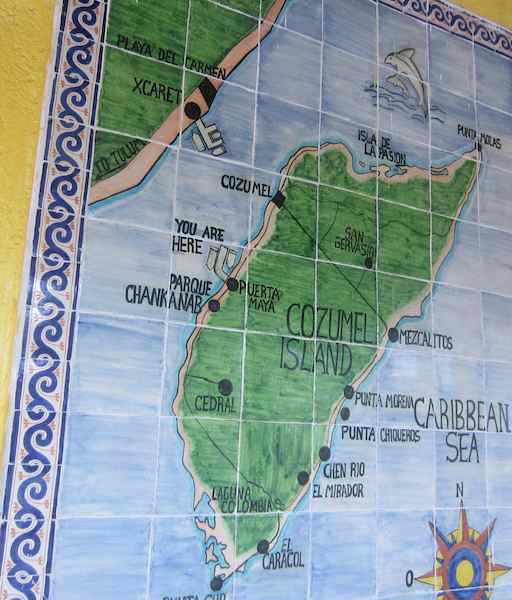 I walked along the road toward the main part of town, frustrated by the fact that there was no free and easy access to the beach anywhere along the route. However, before I got to my destination, it began to rain and I turned around. By the time I got back to the ship, I was completely soaked. 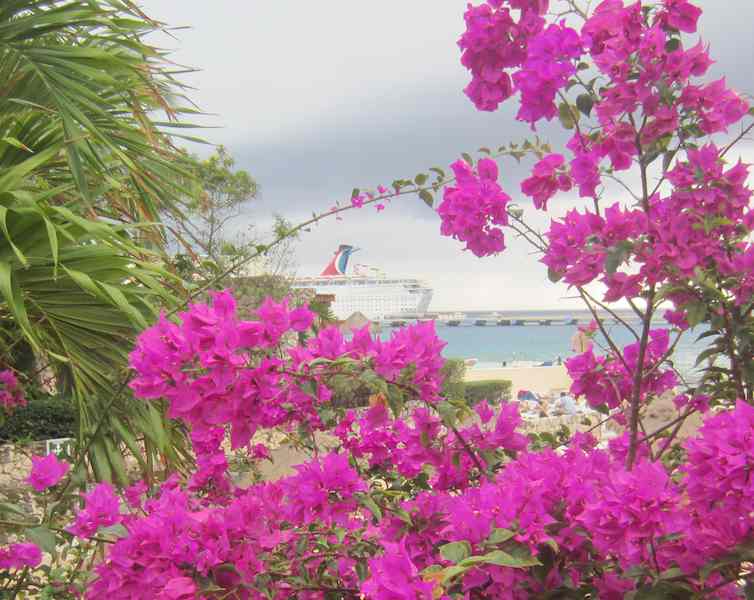 The ship was scheduled to depart at 10pm and all the passengers were supposed to be back on board by 9:30. A lot of them maximized their time ashore, as the lines after 9:00 were quite long. 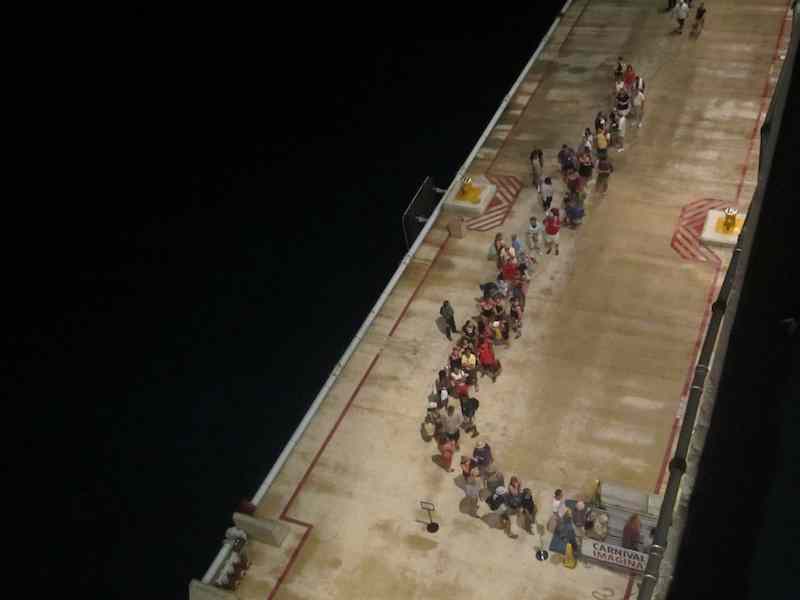 The next day was spent at sea. The sunset was beautiful. 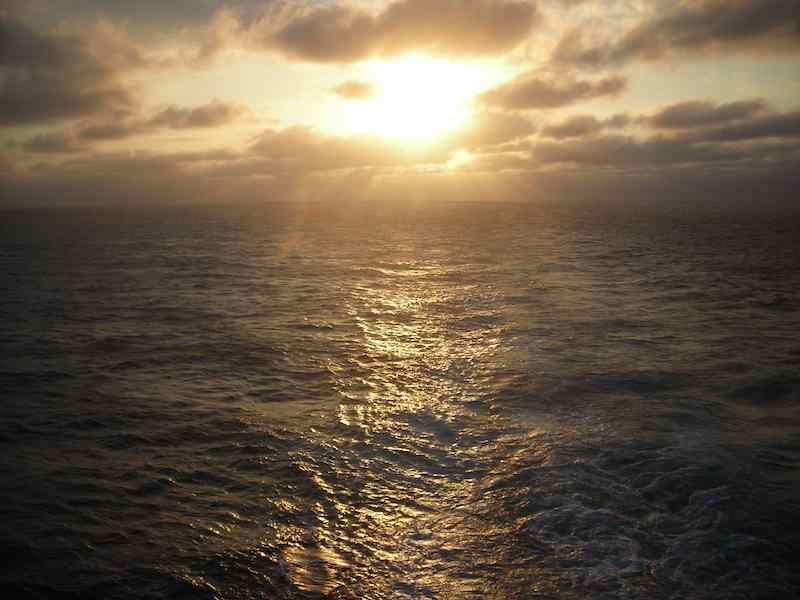 We arrived back in Miami early Friday morning. There were two ways you could leave the ship. If you carried your bags, you would leave when your deck was called. If you tagged your bags, they were picked up the night before and you would leave when your tag number was called. Below you can see the hallway with tagged bags. There were 2000 people leaving the ship, and it took less than two hours to have them all disembark. The cruise line wants them off fast because that afternoon they would be boarding a new set of passengers, setting sail for the Bahamas late in the day. 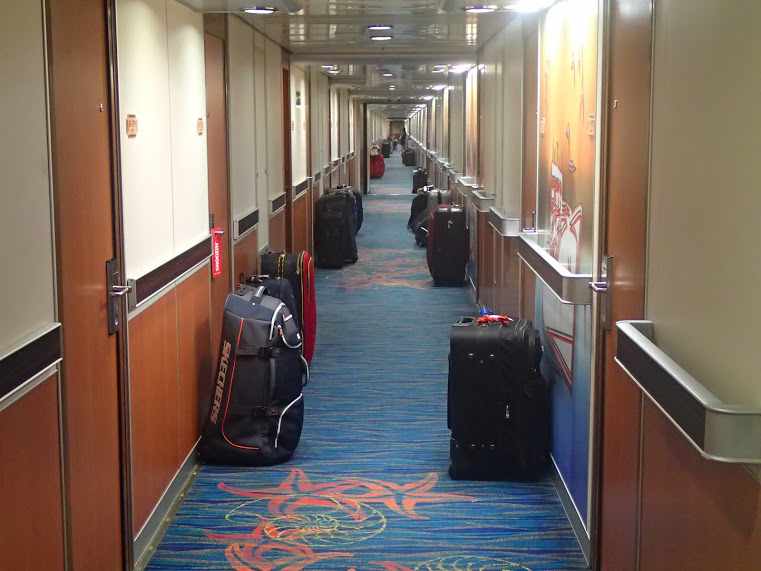 Probably the cheapest way to take a cruise is to fly in the morning of departure, take a taxi to the ship (I was told that the Carnival shuttle was actually more expensive than a taxi), and when leaving, schedule a flight on the same day that the ship returned to port. We did not do that. We came two days early so we could have adventures before the cruise and left the morning after docking. That substantially increased our expenses. The cost of the cruise itself plus the automatic gratuities are only part of the expense. The costs of getting to and from the ship can easily cost as much. And then there is the spending that people do while on the ship, which for some people is probably as big as the other two together.

On Saturday we got up before sunrise and took a free motel shuttle (actually, it was not free--it was part of the price of the room) to the airport. I got a window seat, anticipating watching the country pass below me. However, we almost immediately rose above the clouds. When we were over Northern Indiana, I looked out the window to search for Rensselaer, and the picture below shows what I could see. 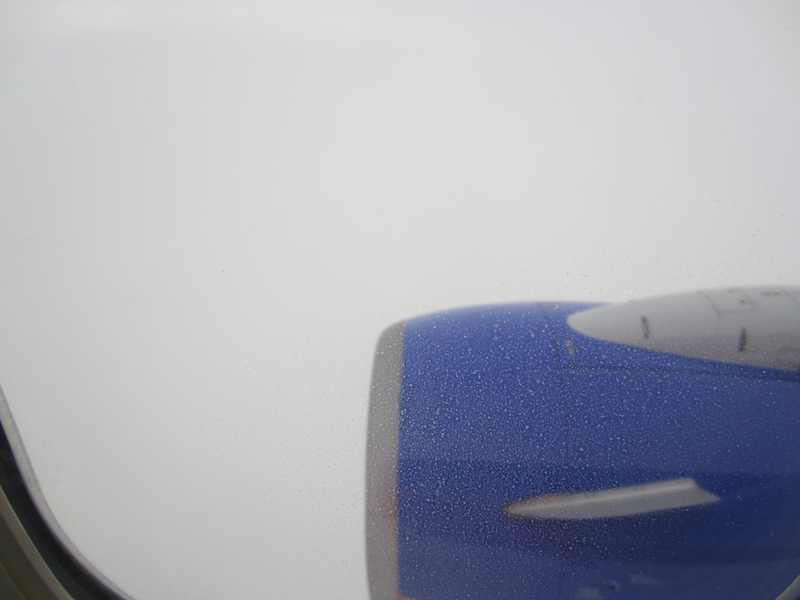 We landed, retrieved our luggage and car, and drove away from Midway Airport. Less than an hour later we were back again in Indiana. 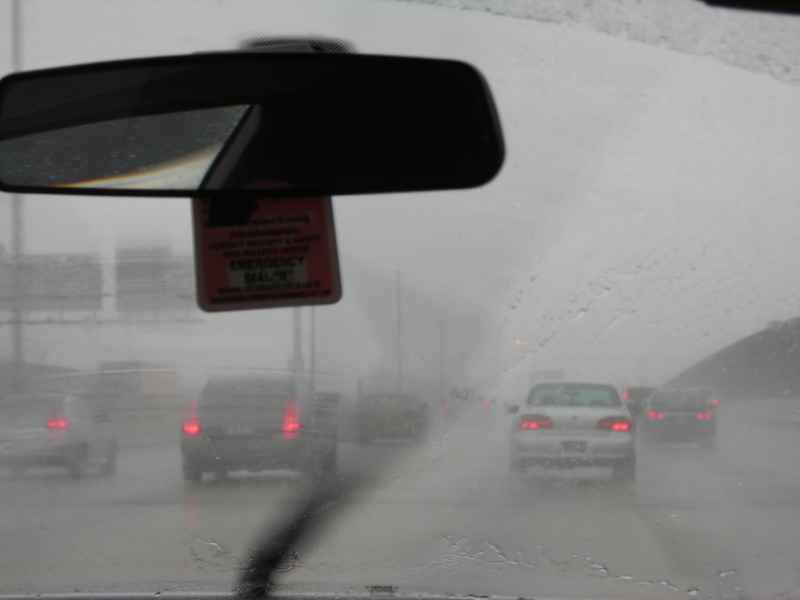